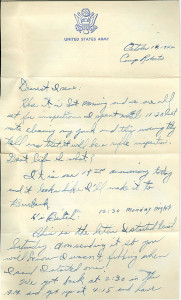 Here it is morning and we are all set for inspection. I spent until 11:30 last nite after I wrote you cleaning my junk and this morning they tell us that it will be a rifle inspection instead. Great life or what?

I just got back from another special duty at the Officer’s Club. Seems like I get called for things like that more than I would like. But I might have the place to myself for a few minutes while the other men are still in the field.
It is our 18th month anniversary today and it looks like I’ll make it to Burbank….

“Rise and shine, you slackers!” Jim watched in amazement as his sergeant barreled his way into the barracks, turning over every bed that had a body in it. Already dressed and ready for chow, Jim had hit the showers after starting a new letter to Irene. He hoped to have some time to himself while he waited for chow. In spite of the loud interruption, he smiled to himself. Sarge wasn’t a bad guy, but every once in a while, some kind of bug bit him, and he went on a tear with the troops.

“Hendrickson, what are you over there laughing at?” Jim didn’t realize he had a grin on his face. Watching the men literally fall out onto the floor instead of falling out for duty tickled his funny bone, but he sure didn’t want to draw the ire of the chief.
“Nothing to laugh about, Sarge.” Jim shook his head to rid his face of the grin. “Matter of fact, I just pulled a detail at the Officer’s Quarters and I will probably be on my feet for a couple of hours making sure they get well-fed, fat, and sassy. I’m laughing at my damn luck, I guess.”

“How did you get tagged for that? I heard tell they needed a man from each unit, and I was looking to volunteer you when I found all these goldbrickers still ironing sheets with their shoulders.”

Jim figured the sergeant’s anger with the bunk-dumping was staged. He was putting on a show to stir the men up. Jim had just written to Irene about the lazy fellows giving his unit a black eye. He and some of the other guys already had plans to give the guilty parties a hard time until they started to carry their share of the duties. Where they were all headed, slackers could do real harm to themselves and everyone else. They all needed to be able to count on each other. No man got a free pass in this Army.