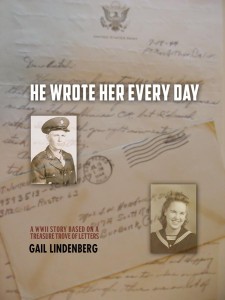 “Thin and fragile envelopes line up as though in regimented files within the brown box, awaiting inspection. Each pale soldier, a sentinel of time past, stands at attention still.” This book tells the story of a soldier who left his bride to enlist in WWII and bring his brother home from prison camp in Germany. He promised her that he would write every day. She saved every letter, and stored them carefully away. Sixty-six years later, she unearthed the box and gave it to her daughter to preserve. The book uses excerpts of the letters, conversations with the young bride, now 90, and a fictional narrative based on research of the history of the time. The story honors their loyalty to their nation at war and their love of each other. Jim’s letters are glimpses of a soldier’s walk through the snow in Europe where he earned a Silver Star for gallantry, but maintains that “he would, at the time, have gladly traded that medal for a dry pair of socks.” Primary witness of events from history books, the letters document a common man’s experience in war. They also reveal a very special love for duty, honor, family, and above all—his wife, Irene.

“Interesting details in the daily life of a WWII soldier and his bride, are brought once again to life by the gentle prodding of their daughter, author Gail Lindenberg, as she weaves their love story revealed in letters written so long ago. I enjoyed ” being” in their experiences as I eagerly read through the saga of what a young soldier was dealing with as he shielded his bride from the reality of war. I hope you treat yourself to this experience too. Very well written.”

More reviews for He Wrote Her Every Day.

Available from Amazon in both book and Kindle form.